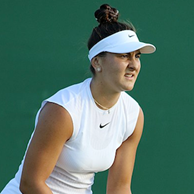 Canadian tennis star and world No. 9 Bianca Andreescu says she’s decided to focus on the many positives of her career instead of the disappointment of an early retirement from the recent Miami Open final against Australia’s Ash Barty.

The 20-year-old sustained a foot injury after stumbling on court during Saturday’s WTA 1000 final, causing her to retire prematurely from the match shortly after. Andreescu has since described the incident as nothing short of a freak accident, saying her body had been in good form up until that point in time.

Her Focus Is On The Future

The young Canadian, who won four three-set matches during her final run, said after the exit that the experience had been very similar to playing several tournaments all rolled into one given all the time she’d spent on court. She said she regarded this to have been a satisfying performance, especially since she hasn’t been spending all that much time actually playing over the past year.

Despite her early exit, Andreescu said it was a nice feeling having all that she had achieved under her belt, and that she was feeling confident in spite of how it all turned out in the end. The young star said that even though success and failure was all part of the experience of being a professional player of sports, her desire was to remain the game for a long time to come yet.

No Billie Jean Cup For Andreescu

Undoubtedly disappointing for the young star is that, owing to the injury, she won’t be able to represent Canada in the upcoming Billie Jean King Cup, which is the premier international event in women’s tennis.

The young star wrote on Instagram that since she loves representing her country, the decision to withdraw from the cup had not been an easy one to make. It had however been a necessary one considering her desire to perform well during what remains of the clay court run and the rest of the current season.

Andreescu has been dealing with a harrowing run of injuries, which included a bad bout that saw her withdraw from all of 2020 after suffering a particularly bad knee injury during the 2019 WTA finals.

The young Canadian’s withdrawal from the Miami Open final followed advice she says she received from personal fitness trainer Abdul Sillah – advice she now says saved her from herself and further injury.