Andy Murray Opens Up About His Injuries 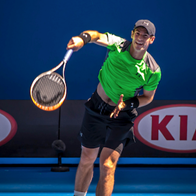 Tennis ace Andy Murray has opened up about his injuries, whether or not this will be his last Wimbledon tournament and the impact that players’ mental health has taken on the world of tennis in recent months.

Murray, now 34 years old and sporting a metal hip, still recalls the difficulties he faced as a young player during his debut at the All England Club meet over 16 years ago. He spoke openly about the impact that it took on his mental health and said that he can sympathise with Naomi Osaka, who withdrew from the championships to protect her own mental wellness. Murray, on the other hand, is preparing to compete in the Wimbledon singles’ championship for the first time in four years.

Fighting His Way Back

After so much time off the court, Murray has his own insecurities about playing in the championships and can relate to what Osaka is going through. He is still fighting his way back on to the court and striving to return to the level of performance that he was able to enjoy before his hip operation and sustaining multiple other injuries. In short, this may well be Murray’s last Wimbledon tournament, but he certainly hopes it is not.

He shared that for him, it’s not so much worrying that this may be his last Wimbledon, but it certainly is something that he often thinks about. He says that he has faced so many injuries and setbacks in the past and as a result, wants to approach each tournament as though it’s his last. This way, he can make sure that he gets the most out of them.

Despite encountering major setbacks and plenty of injuries over the course of the last few years, Murray still believes that he is very lucky to still be able to play tennis. He acknowledges the fact that there are millions of people across the world who find themselves in much worse positions than he is.

However, he did add that unless someone has been in a similar situation to him, whereby he went from being 18 years old, not playing in front of all that many people, to suddenly playing on the Wimbledon court at the age of 19. Murray admits that when he was young, he found it tough to deal with public criticism but now that he is older, he has gained a better perspective on things.