Anthony Davis Injury Has Fans Up In Arms 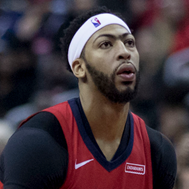 Anthony Davis is out for the count over injury yet again, leaving LA Lakers fans to be everything but impressed.

NBA fans were left fearing bad tidings after Davis went down injured in Game 4 between the Lakers and the Phoenix Suns on Sunday – which saw the Suns run circles around their opponents with a series levelling 100-92 finish in the first round of the playoffs.

The second-seeded Suns wasted no time making the most of Davis’ groin-injury absence during the second half of the game, with Deandre Ayton levelling the day off 14 points and 17 rebounds for reclaiming his squad’s home-court advantage after a couple of straight losses.

As for Davis, before taking his leave after the first half of the game, he scored six points on a 2-for-9 shooting – this after he added 34 points to the scoreboard in each of the Lakers’ two victories of the first round of the playoffs.

Davis appears very much still in recovery from a hyperextended leg suffered during Game 3 – an injury he’s clearly managed to aggravate during Sunday’s Game 4.

The Laker on Sunday fell awkwardly to the ground while clutching his leg after a layup attempt stopped short by Jae Crowder. That seemed to be it for Davis as he was nowhere to be seen on the sideline following the strange and embarrassing fall. He was officially ruled out by the team in the third quarter of Sunday’s game.

Sunday’s injury is but the latest in a particularly difficult season for Davis. He’s already missed 36 of his team’s 72 regular-season games, having missed most of those with tendinosis in his right Achilles tendon. And while his status for the remainder of the season is far from clear, Lakers fans on Sunday took to Twitter to express a mix of disappointment and anger.

A Struggle Without Davis

But Davis – love him or blame him – left a gaping hole in the Lakers’ defense following his departure on Sunday.

The Lakers struggled in his and Kentavious Caldwell-Pope’s absence on Sunday before finally coming in a for a last-minute surge which ended up proving a matter of too little, too late. This left the court wide open for the Suns to improve their efforts against the defending champions, which they duly did in convincing fashion.

By the time the action reached the final nine minutes of play, the Suns led by a stunning 18 points before being trimmed back down to size by LeBron James’ 19-8 run.