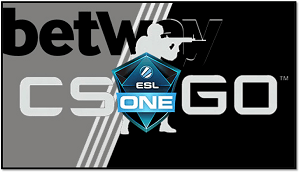 In the latest news regarding betting partnerships, sportsbook and casino operator Betway has now been named the official betting partner and sponsor of one of the world’s largest international eSports tournaments: The ESL One Cologne Counter-Strike Global Offensive.

eSports is gaining a massive following worldwide, and with the sport recently being accepted by the Olympic Council of Asia as an official medal sport in the 2022 Asian Games, more major firms than ever before are taking an interest in the betting side of the growing competitive gaming market.

The new partnership was revealed on ESL Cologne’s website, where it was also announced that Betway would be broadcasting live odds for the tournament’s events for the first time ever. This year’s tournament was held at the LANXESS Arena in the German city of Cologne, which is also the home of Cologne’s world famous ice hockey team.

In the event, 16 of the world’s most skilled CS:GO teams went head to head for their chance at a portion of the $250,000 prize pool at stake. The tournament kicked off with group stages from July 4 to July 6, with 8 teams progressing to the playoffs and the final 2 ending up in the Sunday finale where two-time champions SK Gaming again won the main title.

Betway Adds ESL to eSports Deals, Including Ninjas In Pyjamas

Since 2016, Betway has been a member of the eSports Integrity Coalition, and have also covered other eSports events such as League of Legends and DOTA 2. This is definitely not Betway’s first eSports betting partnership either, as the operator also sponsors one of the top teams that competed at One Cologne – Ninjas in Pyjamas.

Betway signed a six-figure agreement with the team last September, gaining rights to its branding and content usage. Ninjas in Pyjamas were eliminated during the playoffs’ first bracket by rival team Cloud 9, who made it to the finals, only to be beaten by SK Gaming for the second year running.

Head of Betway’s advertising and marketing team Anthony Werman has commented on the new eSports deal, stating that his company is delighted to partner with ESL for Cologne, which is a ‘landmark event’ of the global CS:GO calendar. Werman also added that the sportsbook was avidly awaiting being able to see the biggest teams ‘battle it out’ for the top prize at this year’s event.