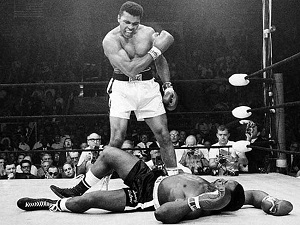 With boxing matches, it really isn’t over ‘til it’s over. There are other sports where underdogs win, or triumph happens late in the day, but not as often and not as late as in the world of professional boxing.

As we gear up for the upcoming August 26th fight between Floyd Mayweather and Conor McGregor, we should remember that anything can happen in the boxing ring. As you’re doing your research and checking the odds at online sportbooks, spare a thought for the outcome you are not expecting, it may just pay off.

To convince you even further of boxing’s unpredictability, and as we build up to the Mayweather/McGregor faceoff, we look back at some of the greatest unexpected victories in the history of boxing.

There have been shock endings to fights for years, but some have also occurred in the not-too-distant past. In 2015 Tim Bradley, Jr went against an undefeated Jesse Vargas for the WBO welterweight belt. Bradley dominated until the last 15 seconds of the fight, until Vargas landed a right-hand hook that shook him hard. He was still standing, but referee Pat Russel mistook the 10-seond warning as the final bell and walked between the fighters. It looked as though Vargas had won with a TKO.

When the truth that the fight had ended prematurely was realised, all the what-if questions began. Vargas maintained that he had needed just one more shot, but the decision was made according to the scorecards. After a nail-biting wait, Bradley was declared the champion.

Audley Harrison, the British Olympic gold medallist, turned professional and did very well at first. However, by 2010 he was struggling and had been defeated by Danny Williams, former taxi driver Michael Rogan and Michael Sprott. Sprott and Harrison went against each other for the second time in the European heavyweight championships. Unlike in their 2017 fight Harrison was still standing after 12 rounds rather than getting knocked out in the third, but in the final round he was sent staggering to a corner. A strong finish for Sprott seemed certain, but Harrison managed to find a moment to sink a hard left and knock his opponent down.

The Famed Rumble in the Jungle

The most famous fight in the annals of boxing history is, arguably, the one between Muhammad Ali and George Foreman in Kinshasa, Zaire, on 30 October 1974. Foreman had been pursuing Ali around the ring, in his calm but relentless style, and by the third round it seemed clear he was going to win the heavyweight championship fight.

Foreman had landed winging hooks and power shots on Ali, but Ali believed he was on a mission set by God himself, and he would not go down as so many had before him. He bent rather than broke, leaning back into the ropes, avoiding Foreman’s worst blows.

Through sheer determination, Ali endured the pain. And his quick-thinking mind was taking in everything Big George did and psychologically showing him that he would not be beaten. He believed he could not defeat Foreman by himself, but that God would help him so that he could reach more people and provide spiritual and financial relief.

Foreman had won 24 consecutive bouts by knockout, and was a 3-1 favourite. Everyone was surprised at the moves he was making, but Ali knew what he was doing. All Foreman’s training had been about getting Ali on the ropes – and that was exactly where he was going. It was a brilliant strategy, and it worked. Ali caught Foreman off guard, made the fight go on for much longer than Big George was used to so that he became exhausted. He went down in the eighth round.

Ali knew what he was doing from the beginning; he simply hung in and watched for opportunity.

In boxing you can expect the unexpected, and you need to remember this when you put your money on the McGregor/ Mayweather fight!