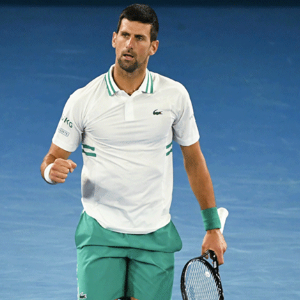 It’s been a good an even unusually successful year so far for Serbian tennis star and current world No. 1 Novak Djokovic. Not only did he add one more Australian Open victory to his champion portfolio only weeks ago, but he’s just officially broken a record he’s been chasing for literally years: trumping Roger Federer’s record for the most career weeks ranked at No. 1 in the ATP’s rankings.

Djokovic on March 8 kicked off his 311th week trending at the top ATP spot, thereby officially surpassing Federer’s record of 310 weeks the top dog. The Serbian has repeatedly in the past cited Grand Slams and weeks at ATP No. 1 as his two main career goals, and he’s fast on his way to achieve also his Grand Slams dream.

The controversial loved-hated Serbian celebrated his No. 1 ATP achievement after winning his 9th Australian Open title in February. Now that he’s achieved his No. 1 career goal, said Djokovic, he’s free to focus all of his attention on the Grand Slams. Djokovic added that when a player is chasing down a No. 1 ranking record, it is necessary to play the entire season all the way through, as well as to play really well in all tournaments.

Now that he’s broken Federer’s No. 1 record, said the Serbian, his goals will adapt and shift somewhat, which he said will allow for more time for being a husband and a father. He said that having more time available on his previously strenuous calendar for being a family man, is something he’s very much looking forward to.

Spending time with family while on tour is something many professional tennis players, and sports people at large, have found to be increasingly more difficult given ongoing travel and accommodation restrictions.

His Journey To The Top

Djokovic first started his No. 1 campaign on July 4, 2011, after winning his very first Wimbledon title (he now has an impressive five of these behind his name).

He could however have achieved the coveted No. 1 record-ranking a month earlier, but he failed to reach the final of the French Open after he got thumped by Federer during the semi-finals.