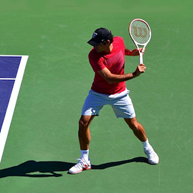 Roger Federer, Switzerland’s famed tennis player tipped to be a favourite at the Tokyo Olympics, has had to withdraw from the tournament. On Tuesday, the player announced that he would be unable to participate in this year’s Olympic Games because of a knee injury that he picked up during the recent tennis season.

Last year, the 39-year-old had two surgeries on his knee. After over a year of rehabilitation, he was able to return to action in March. This marked 13 months after the injury forced him to retire from the semi-final of the Australian Open.

More Betting News... Emma Raducanu On The Road To Recovery

Not The Only Big Name To Withdraw

Unfortunately, Roger Federer is not the only big tennis name to have pulled out of the Olympic Games. He joins a long list of other players who will not be present during the event, running from 23 July to 8 August. This list includes the likes of Nick Kyrgios, Serena Williams, Simona Halep, Rafael Nadal, Dominic Thiem and Bianca Andreescu.

The winner of this year’s first three Grand Slams, Novak Djokovic, said that he was on the fence about competing in Tokyo. This came after the Olympics committee decided to ban fans from attending and placed restrictions on the number of people participants would be allowed to take to the Games with them.

Federer took to Twitter to express his disappointment at not being able to represent his homeland of Switzerland at the Olympic Games. He said that during the grass court season, he experienced a bit of a setback with his knee and was forced to accept that he would officially need to withdraw from the Tokyo Games.

The tennis legend added that he is greatly disappointed to not be able to participate, especially seeing as how it has been nothing less than an honour and highlight of his career every time he was able to represent his home country. However, the player also confirmed that he has already begun the process of rehabilitation in the hopes that he will be recovered later on this summer.

In 2008, Roger Federer took home the gold medal in the doubles at the Beijing Olympics. At the time, he was paired up with Stan Wawrinka. Four years later, at the London Olympics, Federer won a silver medal in the singles tournament after he was defeated by Andy Murray, who was playing on home soil.

Bet on tennis ONLINE. Choose a top sportsbook and sign up!