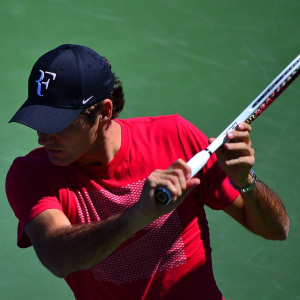 Roger Federer has revealed that he’ll be celebrating Christmas with his family in Dubai.

The 20 Grand Slam champion said the idea behind spending his off-season training in the UAE was to fully test his knee in order to assess the likelihood of him participating in next year’s Australian Open, which has now been confirmed as about to get underway on February 8.

While the initial goal was to remain behind in Switzerland before travelling to Melbourne in time for the Open, Federer said training in Dubai is the best course of action for the recovery of his knee and his fitness right now. Training indoors in the cold back home would by no means have been ideal, he explained.

Federer, despite having been largely absent from competition time on the court in 2020, as recently voted the ATP Fan’s Favourite Player for an incredible 18th year in a row.

First instituted in the year 2000, and with Gustavo Kuerten its inaugural winner, the ATP Fan’s Favourite Player Award has seen Roger Federer retain his vice-like grip ever since the first time he took home the famous popularity prize in 2003.

Many fans expected Rafael Nadal – another beloved fan-favourite on as well as off the court – to walk away with this year’s award. But fans clearly don’t mind whether or not a player has spent a lot of time competing during any given year.

Federer during another recent awards ceremony caused outright pandemonium in the tennis world when he revealed that since he wasn’t yet back to full health after undergoing several operations to his knee, he may very well already have played the final match of his career.

Federer earlier this month during his acceptance speech at the Switzerland Sports Awards cast doubt on his participation in the 2021 Australian Open. Not only did he reveal his recovery to be taking much longer than what he had hoped for, but he also dropped several hints regarding any future competitions beyond Melbourne.

Though Federer said he wasn’t yet at 100% – even though he had hoped to be that by at least October this year - the news about his training in Dubai has ignited a new wave of hope among his fans and the tennis world at large, regarding a possible return and deferred retirement.