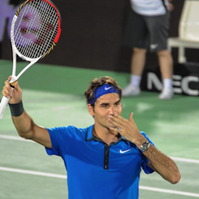 Roger Federer will compete in this year’s French Open. And its news tennis fans all over the world would have been elated to hear.

The 39-year-old Swiss at the end of last year raised absolute mayhem when he appeared to hint at a possible earlier-than-anticipated retirement following two bouts of knee surgeries and a long and protracted road to recovery.

But on Sunday, Federer, who hasn’t competed in a Grand Slam since January 2020, finally confirmed he’ll be ready and waiting on the court at Roland Garros when the French Open gets underway on May 30.

The tennis great, who won his lone French Open title at Roland Garros in 2009, will first play the Geneva Open on the clay in May, after which he’ll head for one of the biggest Grand Slams events of the year in May.

Federer, a phenomenal 20-time Grand Slam champion, made his grand return after 14 months away at last month’s Qatar Open. He has however not competed since then. At Doha, he pipped Britain’s Dan Evans in his highly anticipated comeback contest, but shortly after got whipped and eliminated by Nikoloz Basilashvili in the very next round.

The tennis great has not had the best of experiences at any of his contests of late. After being beat by Novak Djokovic in last year’s Australian Open, Federer underwent surgery to his right knee, and was eventually ruled out of the entire season by ongoing complications due to injury and necessary recovery time.

The Long Road Back

Federer missed out on three consecutive French Opens beginning 2016 and had badly wanted to make a grand return to this year’s delayed Australian Open. He however said upon withdrawal that he’d run out of recovery and preparation time and had subsequently made the decision to make his grand return in Doha instead.

Nadal’s 2020 French Open title victory saw him not only beat Novak Djokovic in convincing fashion, but also strike his way to his (Nadal’s) record 13th Roland Garros title. Nadal’s French Open final display will likely for a very long time be remembered as one of the finest in the history of the competition.