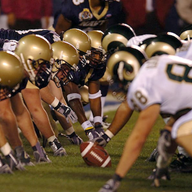 It’s official: NFL down judge Sarah Thomas has made history by being elected the first female Super Bowl official ever. Thomas is part of the officiating makeup announced by the National Football League on Tuesday.

The NFL Executive Vice-President of Football Operations said that Thomas earned the right to make history by being appointed official to the Super Bowl. The VP said that her absolute commitment to excellence and elite-level performance as a down judge made her the perfect candidate. Thomas will be a member of the officiating crew set to appear on-field at Raymond James Stadium in Tampa, Florida, for the upcoming Super Bowl on February 7.

Crew To Be Led By Carl Cheffers

The seven-person crew will be led by head referee Carl Cheffers, who has served NFL game official for an incredible 21 seasons before being promoted to referee in 2008. In total, Cheffers has officiated and/or refereed 17 games in the playoffs, including 2017’s Super Bowl.

The rest of the crew will be made up of line judge Rusty Baynes, umpire Fred Bryan, back judge Dino Paganelli, side judge Eugene Hall, field judge James Coleman, and replay official Mike Wimmer. Combined, this year’s Super Bowl crew has a phenomenal 88 years of NFL experience, and 77 years of playoff games experience.

This year’s Super Bowl will be Coleman’s as well as Thomas’ first ever, and second for Paganelli, Cheffers, Baynes, and Bryan.

Thomas first joined the league full-time as permanent game official in 2015. This year will be her 6th season with the NFL.

The 47-year-old is however no newcomer to breaking the barriers of gender. She in 2007 became the first woman to officiate a game in a top division in Mississippi, and also during that year the first female to referee an official football game after joining Conference USA’s full-time staff profile. The first time she officiated a bowl game was back in 2009 during which year she worked Marshall’s win over Ohio in that year’s Little Caesars Pizza Bowl.

Thomas first got involved in officiating the game after she became interested in the challenge when she accompanied her brother to a Gulf Coast Football Association meeting. That was back in 1996. She during a 2013 interview with a famous American sports show revealed how officiating had grabbed her attention because of the intrigue she experienced at how serious a business it had been for those involved.