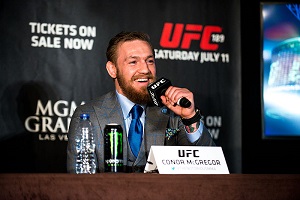 YouTube personality and pro-boxer Jake Paul has challenged UFC fighter Conor McGregor to a fight. Not only is he willing to part with $50 million for the honour of fighting the Irishman, but he’s apparently got the bank guarantee to prove he can afford it too.

Paul late last week released a video confirming that a $50 million offer had been sent by his people to McGregor’s people – according to the taunting young boxer, the biggest fight offer ever extended to the foul-mouthed UFC star.

Paul first began drawing attention when he started off the year knocking out some random fellow-YouTube personality. But what really got the fight world to sit up and take notice was when he ended his 2020 stunt in the ring by clobbering out cold former NBA star Nate Robinson with a monster KO during the support act of the main event between Mike Tyson and Roy Jones Jr. streamed late November over pay-per-view.

His Life Is About Beating Conor

Paul earlier this month told ESPN how he had decided to dedicate his life to lock down a boxing match with the former UFC two-division champion. Scoring a bout with “The Notorious” may not be easy, but according to the 2-0 pro-boxer, throwing heaps of money at the prospect is very much worth a shot at checking off “the boss”.

UFC boss Dana White has in the meantime offered a short and bluntly-worded consolation offer of sorts: he would be willing to let Amanda Nunes knock his (Paul’s) “ass out”. Though clearly joking, it remains to be seen whether White or McGregor will actually indulge the idea of a potential fight between the UFC boss and the “only a YouTuber”.

Will McGregor Take On No. 2?

Paul’s profanity-riddled video invitation follows an announcement by Floyd Mayweather Jr. regarding his upcoming (confirmed) going toe-to-toe against the YouTuber’s brother, Logan Paul. The fight between Logan Paul and Floyd Mayweather will take place on Feb. 20, 2021.

The Notorious, who is scheduled to make a comeback out of “retirement” to fight Dustin Poirier at the Octagon on Jan. 23, hasn’t fought since defeating Donald Cerrone at UFC 246 at the beginning of 2020. McGregor has only ever fought one boxing match – the match he lost to boxing legend Floyd Mayweather Jr. in 2017’s Money Fight.

According to the daring young YouTuber, his $50 million fight offer is currently being discussed with McGregor’s team.