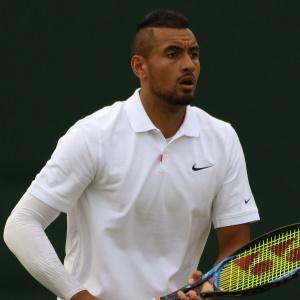 During his brief but incredibly entertaining stint at Wimbledon this year, Nick Kyrgios looked happier than he’s ever been. However, he has been warned that he will be unable to get away with the efforts he displayed during the tournament for the rest of his career. Unfortunately for the Aussie tennis star, he was forced to retire from the tournament with a stomach injury in the middle of his third-round match against Felix Auger Aliassime. This came after Serena Williams also had to exit the championship due to injury.

While Kyrgios has certainly been able to make waves as a player in his own right, he has often been referred to as a “part-time” tennis player. This, according to commentator David Law, comes with as many troughs as there are peaks. Speaking on The Tennis Podcast, Law said that injury is an inevitability of not being match tough due to a lack of training.

This sentiment was echoed by tennis legends Billie Jean King and Ilana Kross, who were also guests on the podcast. They said that in order to enjoy a successful career as a tennis player, one needs to pay the price. You can’t just blag it, regardless of how good you may be. Analyst Matt Roberts stressed that Kyrgios must work on finding the balance between playing tennis and taking time off from it.

Not Up For Competition

At the age of 26, Kyrgios has missed a lot of tennis in recent times. In 2020, he was forced to take time off due to the cancellation of many tournaments resulting from the global health crisis. This year’s Wimbledon tournament marks the first time that the player has been back on the court since playing in the Australian Open earlier this year.

Unsurprising, it was Kyrgios’ body that ultimately let him down. His body was simply not ready for the physical exertion that comes with competing at a Grand Slam tournament. Simply rocking up to a tournament after five months of inactivity could have devastating effects on the human body.

Catherine Whitaker, a broadcaster, said that although Kyrgios gave his fans a few wins, his withdrawal from Wimbledon will likely sour memories of him. She said that as much as Kyrgios has had magical moments while playing tennis, having to end his time at Wimbledon in the way that he did tends to steal away many of the magical moments that he has already had.