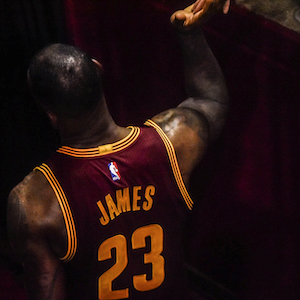 Poking fun at NBA greats appears to have become a thing. LeBron James after his quarter-final shine against the Golden State Warriors became the latest subject of the jab when golfer Paige Spiranac let out a cheeky poke in his direction when referring to him as a “superb actor” and a prime candidate for “Space Jam 2”.

James during the final quarter of Thursday’s AEST got palmed into a tumble from a jab to the eye by Daymond Green, which sent the Los Angeles Laker into a panic of agony on the floor while holding a hand over his jabbed eye and grabbing at his leg with the other.

The incident eventually led to match officials deciding on a common foul, after which James got awarded two free throws.

While much speculation ensued over whether the incident should actually have been proclaimed a foul, pundits wasted no time calling out James for being ever so slightly overdramatic.

Still, it had been James who delivered the match-winning shot for the Lakers with a personal finish of 22 points, 10 assists, and 11 rebounds, while Golden State guard Steph Curry registered the contest-high of 37 points for the opponents.

The Lakers will next go up against the Phoenix Suns in the first round of the Playoffs, with the Warriors headed for the Memphis Grizzlies to play for a berth.

Lakers Unique At No. 7

The Lakers, now ranked 7th seeds, failed to reach a Playoffs spot during the regular season, and though escaping only barely from a potentially serious upset at the hands of the Warriors, remain first round favourites as well as likely contenders for this year’s NBA finals.

They’re also the first 7th seed to be favoured over No. 2 in a post-season series in three decades. They’ve opened as a -300 favourite at Caesars William Hill for beating Phoenix in the upcoming best-of-seven series. And although the odds have moved slightly since, they’re still hovering at -270 for trumping the Suns.

Interesting too is that only the 1995 Chicago Bulls and 2003 Lakers have emerged as bigger favourites in an NBA Playoffs series without a home-court advantage.

Only four teams seeded No. 7 have ever won a best-of-seven series in the first round, with the last such overthrow nine years ago when MVP Derrick Rose got injured leading to an upset by the Philadelphia 76ers over the Bulls.