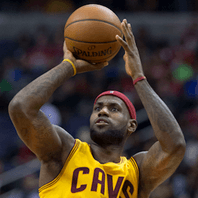 LeBron James is a star. And not just any star – he’s the ultimate All-Star. This was clear once again on Sunday night as Team LeBron showed off its dominating skills during a bulldozing run to close out the first half of the romp over Team Durant in the NBA’s 70th midseason All-Star showpiece.

The eventual outcome? A 170-150 All-Star-studded victory over Team Durant, and a showing of why LeBron remains the perfect NBA captain even when faced by the strangest set of circumstances ever at play during an All-Star skirmish.

No Crowd – But Still A Showdown

Staged in a near-empty arena, and a production showing pure determination on the part of the NBA to pull off a made-for-television basketball extravaganza that would be big for TV and the league’s global brand, the entire thing was quite symbolic of a pandemic era.

Strangely enough, even with tough and nearly impenetrable safeguards fully in place, two players still managed to not even make it as far as the tipoff. Philadelphia stars Ben Simmons and Joel Embiid were both ruled out of Sunday night’s All-Star romp because they had got haircuts from a barber who later tested positive.

Even so, once the game was underway, the action fell fully in line with all three the previous All-Star romps completed under the new captain format. Captaincy and teams are decided by the top vote-getters from each conference, and it’s a privilege to captain that James has been awarded all four years in a row under the new rule.

Leading Team Durant with 26 points had been Bradley Beal. But not even that had been enough to sink Team LeBron, who practically swept the first three quarters on their way to becoming the first to reach the final target score. Their $750,000 raised for charity will go towards the Thurgood Marshall College Fund.

The second quarter saw Chris Paul delivering back-to-back lobs powered through by Damian Lillard (32) and Stephen Curry (28). Paul however eventually ended up on the receiving end of a revenge pass from Curry, who showed himself never one to be outdone by knocking one down in return.