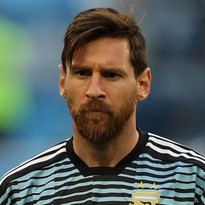 Barcelona soccer star Lionel Messi could be facing a suspension of up to 12 games after he during Sunday’s Spanish Super Cup final swung out his arm and hit opponent and Athletic forward Asier Villalibre in the head as the pair darted forward toward the box. Villalibre immediately fell to the ground following the collision with Messi’s extended arm. Neither of the two players were anywhere near the ball at the time of the incident.

Messi’s red card – his first in a total of 753 games played for Barcelona – now threatens to side-line the star player for what could possibly become a lengthy period of time. And though a harsh punishment by any measure, at least according to referee Gil Manzano, also a completely justifiable punishment.

If found guilty, Messi will be left dealing not only with a 3-2 loss to Athletic Bilbao, but will also be bearing the brunt of not being allowed to compete in any of the upcoming Spanish League or Copa del Rey skirmishes.

Messi has only ever been sent from the field twice – both times during his stint with Argentina’s national team. Sunday’s red card was his first official red card, which would have only aggravated his frustration at not only a particularly poor personal performance, but also a major defeat for Barcelona.

Though not yet declared guilty as charged, Messi hit his opponent with what was after the game described by Manzano as “excessive force”. The fact that the ball wasn’t anywhere near Messi will probably not count in his favour as he faces the music for his actions.

Undoubtedly adding to Messi’s frustration is a particularly bad off-season with the club. After asking to be released from the club, followed by a firm denial of his request, the star Barcelona cornerstone has appeared visibly and increasingly more frustrated on as well as away from the action.

Adding insult to injury will have been a fitness issue leading Barcelona coach Ronald Koeman to leave the star out of Wednesday’s semi-final against Real Sociedad. The nature or extent of the issue has not yet been specified.

Messi assisted in the first goal for Barcelona on Sunday. Both goals posted by Barcelona were scored by Antoine Griezmann. Sunday’s defeat saw Barcelona continue the title drought that has plagued the club since last season.