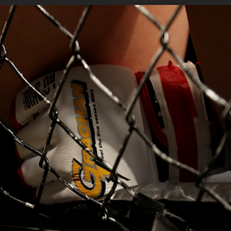 Save for risking it all by losing an ear, Canadian MMA fighter Khetag Pliev on Thursday night discovered that being stripped of a finger is clearly also a possibility. Pliev had to have his finger surgically re-attached after it was separated from his hand during the co-main event fight against Devin Goodale at the Cage Fury Fighting Championship in Philly.

A former Olympic freestyle wrestler now turned pro MMA fighter, Pliev told event promoter Rob Haydak that his finger had initially only been dislocated. Following the dislocation during the first round, however, it got completely severed during the second round of the middleweight brawl.

In Search Of A  Missing Digit

According to a report by ESPN, the finger had initially been announced stray, and a call made at the venue to search for the missing digit. It was apparently later discovered to have been wedged inside the fighter’s glove.

Pliev after Thursday night’s finger-ripping contest told reporters that he had during the second round of the bout felt his glove being clutched and held by his opponent. He added that he could feel as his finger snapped while in Goodale’s clutch.

Then, following the second round, Pliev said he could see that the bone of his finger was protruding from the skin, and that it was out in the open. Even though Pliev says he had been eager to continue to fight, his doctor had apparently noticed the severed finger and had subsequently ordered the fight to be stopped.

Goodale has since responded to questions about the finger-ripping incident by saying he does not remember much about what happened in the heat of the glove clutching action. He would have to watch the official recording in order to determine what had happened and to refresh his memory.

The middleweight pro-fighter, who was eventually declared the winner by a second-round technical knockout rule, says the only thing he remembers about the incident alluded to was being hit by something big.

Pliev has in the meantime confirmed that the next step will be to meet with his doctors to figure out whether he needs more surgery or physical therapy for his injured digit. He said the goal was however to fight again as soon as possible.