The MLB May Soon Return To Montreal 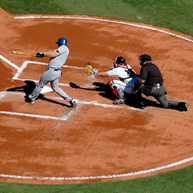 Major League Baseball may actually be returning to Montreal. According to recent reports, the Stephen Bronfman-owned Montreal Baseball Group has made a re-uptake of its registration with the Quebec Registry of Lobbyists. It has furthermore requested to enter into discussions with local government over the possibility of it part-financing a new sports complex.

The group already last year started making headway regarding the developing of a project in collaboration with the Tampa Bay Rays, which project would necessarily include a new sports complex in Wellington Basin. The Montreal Baseball Group recently confirmed this information, along with the most recent developments, to The Canadian Press.

The group furthermore confirmed that it will in the upcoming months enter into discussions with local government over the economic impacts of the proposed project and collaboration, along with what form a potential financing lifeline from the Quebec government would potentially assume.

The group has not at any point in the past approached federal government for financial assistance of any kind. It will however now make a submission for aid for the development of the sport and community centre and project to provincial government. The latest news follows the addition of two lobbyists to the group’s growing list: Richard Epstein (BCF Lawyers) and William Jegher (financial giant “EY”) will both join Claridge, which is the Bronfman family’s investments vehicle.

The hope is to be able to erect the new community centre and sports stadium in Griffintown, and on a portion of land current owned by Crown corporation Canada Lands Company. A partnership to this effect has reportedly already been formed with real estate developer Devimco in order to pave the way for purchasing and developing the plot and stadium.

According to additional information provided, the Montreal Baseball Group furthermore hopes to become a part-shareholder in the Tampa Bay Rays. This will ensure that the team will play half of its games in Montreal, and the remaining half in their hometown of St. Petersburg.

This will represent a massive saving on development costs by effectively eliminating the need for a full-blown stadium in Montreal or a retractable roof in St. Petersburg, Florida.

According to an interview with the owner of Rays in December, Stuart Sternberg, the sister city project in collaboration with Montreal is the only option he’s willing to entertain and embark on