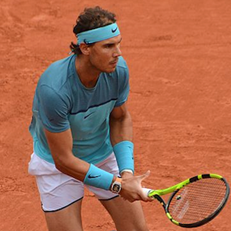 Though eventually happy and celebrating a convincing win over Novak Djokovic in the final of the Italian Open in Rome, Rafael Nadal on Sunday had harsh words for chair umpire Carlos Bernardes during a particularly ugly moment of the match.

After having slipped and tripped for the second time in under a week on the painted lines on the court, the world No. 2 clearly lost his cool with the situation before taking it out on the chair umpire while shouting about the possibility of players being “killed in the end”.

Nadal explained during the post-match press conference that since the lines are physically painted onto the court, they have a tendency to be slippery and even slightly raised from the surface. He defended his rant by saying he had become upset over the possibility of “major injury” while referring to the lines as dangerous.

He ended up with only a small scratch on his knee from Sunday’s tumble.

Sunday’s Italian Open final was the 57th time Djokovic and rival Nadal had met on the court. Nadal, who successfully managed to chase down his 10th Italian Open title against the current world No. 1, did so in a rapid and convincing 2 hours and 49 minutes.

More than another milestone successfully passed by the Spaniard, the Italian Open will have created the perfect preparation ground and opportunity, not to mention mental boost, during the run up to the French Open at Roland Garros.

Nadal will be gunning for an incredible 14th French Open title once the famous clay-court tournament gets underway on May 30.

Hard Work Has Paid Off

Nadal, following his big title win on Sunday, spoke about having been lucky in many instances during the tournament, but also about having worked exceptionally hard. He said that the hard work had paid off, as he soon discovered himself to be playing better and better as the competition progressed on the clay.

Commenting on his 10th Italian Open trophy, Nadal said it had been an amazing feeling holding the trophy in his hands once again. He said such an event had seemed impossible to him, and that he was grateful to his team for all their support throughout the tournament.