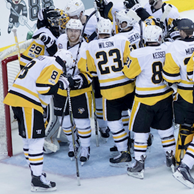 Jim Rutherford’s resignation last month has created the opportunity for an all-star hockey cast to join the Pittsburgh Penguins.

Leaving sports broadcasting to join the Penguins outfit is former Flames and Maple Leafs General Manager Brian Burke, who will now be joining Pittsburgh to become the president of hockey operations.

Also joining the Penguins is Ron Hextall, who will be stepping into the departing Rutherford’s shoes as new General Manager. The NHL team announced the hiring of the new GM on Tuesday, saying it hopes to build a team capable of bringing home the Stanley Cup – this year. And if truth be told, if anybody could step up to the seemingly crazy challenge, it would have to be Hextall.

Not only is he as experienced as they come, but his life has been about Penguins hockey and the NHL for as long as he can remember. The 56-year-old is the son of Bryan Hextall Jr., who played for Pittsburgh in the 1970s and who enjoyed a lengthy run as Philadelphia Flyers top goaltender.

Hextall Off To A Confident Start

Hextall is very clearly in for the win. He earlier this week after a hasty courtship that began burning brightly only days before, declared himself in for the penny and in for the pound.

Pittsburgh has three of the best players in the world, said the new Penguins GM at the time of the big announcement, which is why the club can be all it possibly can at this point in time. The newest Penguin was of course referring to Kris Letang, Evgeni Malkin, and Sidney Crosby.

While stepping into four decades’ worth of experienced shoes as Hockey Hall of Famer Jim Rutherford prepares for the big exit will undoubtedly not be easy, Hextall will have all the support he could possibly ask for in long-time NHL exec Brian Burke.

The 65-year-old was unexpectedly lured out of a comfortable role as TV analyst and broadcaster to join what he described as “Cadillac” class. The only reason he’s happy to be bidding living in Toronto farewell, said the NHL legend on Tuesday, is because the Penguins are no ordinary team.

But Burke also views the job with Pittsburgh as a golden opportunity to complete an unfinished circle. With Rutherford effectively out of the picture, Burke will finally get to have a go at bringing the Penguins back round to what he (Burke) considers a golden bygone era.