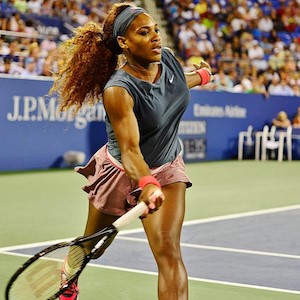 Serena Williams is following her most recent US Open victory, officially the single player – male or female – with the most US Open wins to her name. Williams has now won a smashing 102 US Open matches.

What’s more, unlike her recent style, the last of the lot only took two sets. Since all five of her matches played prior to her most recent victory had been three-setters, most of the tennis world had been expecting a three-set repeat against Kristie Ahn too.

And since Williams has had to engage in quite a few pressingly tight first-round matches in recent times, the tennis super-star after the win spoke about feeling really pleased with how she had practically fought for every point scored.

Serena Will Be Serena

That’s however not to say that at least a little bit of the aforementioned tightness could not be detected during the very early stages of the stand-off. A pair of double faults by the champion player basically handed the opening game of the match to Ahn. But since Ahn was up against Serena Williams, the tables were soon turned in the opposite direction.

But Ahn, notwithstanding her level of experience being nowhere near that of Williams, has her own special charm following her onto the court. Having a year ago won her first-ever major match at the age of 27, beating US Open champion Svetlana Kuznetsova, she remains somewhat of an age-enigma. And hers is a story many international fans consider to be particularly heart-warming.

Ahn Put Up A Great Fight

As for her match played against Williams, the most important round of the entire affair ended up being Williams’ 4-all serve during the initial set. Well known for her habit of hammering out error-rectifications on the serve, Williams wasted no time making quick work out of a pair of weak serves fired off by Ahn.

And a similar pattern of events played out also during the second set. Though Ahn would manage to hold a solid grip on two initial points towards a 3-1 lead, she eventually ended up surrendering mentioned game on the back of a double fault. And it had been at exactly this point in time that the entire dynamic of the match had shifted.

Williams eventually during the 81st minute of the match closed the deal with a pair of aces supremely played.