Ninjas in Pyjamas Ends Its Sponsorship Deal With Betway 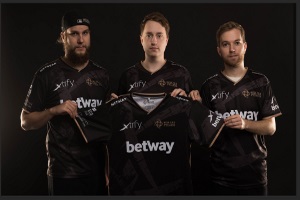 After what has been less than a year into their partnership agreement, which was signed in September last year, pro eSports team Ninjas in Pyjamas (NiP) and international online betting brand Betway have agreed to part ways on amicable terms.

The two organisations ended their partnership deal after NiP was instructed to obey the sponsorship rules of the League of Legends Championship Series (LCS), which state that under no circumstances may gambling operators sponsor eSports teams or organisations.

The two parties’ sponsorship deal officially ended on August 13, as revealed by the eSports team. However, the Swedish eSports team’s individual Counter Strike players will still be covered under Betway sponsorship.

The deal, which was intended to be a multi-year agreement, was inked by NiP in September 2016 and named Betway as the team’s major long-term sponsors. However, LCS owner Riot Games has since banned gambling websites from sponsoring eSports organisations, and it was these requirements that prompted NiP to terminate their partnership with one of the world’s largest iGaming operators.

The rules of LCS are very strict when it comes to the sponsors of eSports teams. The sponsorship deal between Betway and NiP was in conflict with rule 7.2.4, which states that no logos of a lottery or any enterprise, service or product related to gambling can be displayed in any way by participating teams.

It was at the end of September that Betway revealed its newly signed agreement with NiP, making the company the team’s headline sponsor. Under the terms stated by the six-figure deal, Betway would receive full player access, content usage rights, on site branding and on-shirt branding of the team. Unfortunately, the branding clause became an issue that could have excluded NiP from the LCS championships.

Lukas Berc, NiP’s social media associate, has since confirmed that LCS’s new regulations are the reason why Betway could no longer sponsor the eSports team. However, he still described the partnership as highly successful as a whole.

This is not the first time when the strict rules of Riot Games forced an eSports team to drop a sponsor. Earlier this year, G2 eSports also ended its partnership with reselling site Kinguin, as the latter’s title-sponsored LoL side qualified for the European Challenger Series. Unfortunately, the Kinguin team lost its position in the Series.