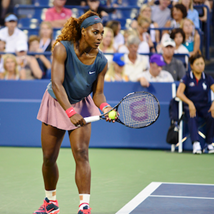 Serena Williams, perhaps the most famous tennis player in the world, has announced that she will be skipping this year’s Tokyo Olympics. The day before the official start of the Wimbledon tournament, she announced that she would be sitting out of the Olympics, which is set to run from 23 July to 8 August. In the press conference held before the London tournament, the 39-year-old champion told reporters that she is not on the Olympic list.

More Betting News... Andy Murray Opens Up About His Injuries

Startling many reporters and supporters, she added that even if she is on the list for the Tokyo Olympics, she certainly should not be. Ms. Williams went on to say that she did not feel like speaking about it more, and that she has not given much thought to what it will be like to skip this year’s Olympic Games.

Not Just A Singles Player

While Williams has certainly earned a great deal of praise for her singles event playing, she also has multiple victories in women’s doubles and mixed doubles events. Collectively between mixed and women’s doubles, she has won 16 Grand Slam tournaments. An impressive 14 of these have been with her older sister, Venus. Two more of them were obtained with Maks Mirney in 1998.

Her other successes include winning three Olympic gold medals, all of which were won alongside Venus. She has also won a Federation Cup and two Hopman Cups.

Williams admits that in previous years, she has had only wonderful experiences at the Olympic Games. She said that in the past, it was represented something great for her. She added that she has not given much thought to missing the Olympics, and that she would prefer to continue not thinking about it. At the London 2012 Olympics, she emerged victorious, taking home a gold medal after defeating Maria Sharapova in the women’s singles event. This was held on the lawns of the All England Club, and brought her total number of Olympic gold medal wins up to four.

Throughout her career, the tennis player has won 73 WTA singles titles. These include 23 Grand Slams and represents a record in the Open Era for men and women alike. This makes Williams only the second player to ever have won so many majors. She is second only to Margaret Smith Court, who holds a record of 24.

She has also completed the virtual Grand Slam. This consists of four victories of four consecutive Slams that are not in the same calendar year.

Try your Luck at a Sportbook today! Sign Up and enjoy Amazing betting options.