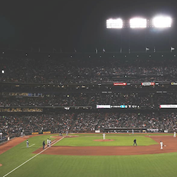 Mets infielder Luis Guillorme during the franchise’s recent spring training game in Port Lucie, Florida, completed a record 22-pitch walk during the fifth inning. And even more incredible is that Guillorme accomplished this stellar feat against rapid-firing righty Jordan Hicks, the man behind a stellar 10 99-plus mph pitches during his appearance at the plate.

The longest record plate appearance in the history of Major League Basketball still belongs to the Giants’ Brandon Belt – a record 21 pitches (2018) that still hasn’t been beat. And considering that pitch counts have been tallied and recorded since 1988 – and don’t include spring training stats – Guillorme’s appearance is one of the most impressive and longest in the history of pitch-counts.

The Story So Far

Guillorme, who was drafted by the Mets during the 10th round of the 2018 league draft, has to date played a total of 109 games across 3 stellar seasons for the Mets. And his determination and grit for making it across a 22 pitch stroll could very well be a sign of enormously good things to come. If anything, the record walker is building a strong case in favour of him being considered an everyday player.

As for the man himself, his is happiness based on having had the honour of embarking on the record walk in the first place – not to mention completing it in grand fashion. Said Guillorme after Sunday’s game, it would have been a crying shame had he not been able to make it full-hog, what with all of that hard work having been otherwise for naught.

As for as the Mets’ performance on the depth-end of things appear to be shaping up for the 2021 season, J.D. Davis seems likely to remain the main man in charge of handling third base. Even so, Guillorme has on occasion been bumped up into the third-base hot seat whenever the need has arisen.

During the 2020 season, the walkabout star spent 9 games stationed at second base, 4 at third, and a total of three at the shortstop. During this time, he racked up an impressive slash line totalling a rating of .333/.426/.439 across a total of 29 games and 68 plate appearances.