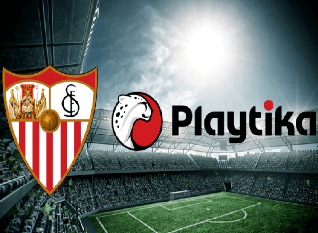 Recent news as seen Spanish La Liga team Sevilla have a new main sponsor following the inking of a deal with leading social gaming company Playtika. The contract, worth several million dollars, is valid for one year, with the option to extend the contract.

The club’s previous main sponsor, the country of Puerto Rico, withdrew its sponsorship during the 2016/17 season. The new government elected on 8 November cited the country’s economic downturn for the decision.

Playtika was the first company to introduce free-play casino-style social games, and was bought by China-based developer Giant Interactive for US$4.4 billion one year ago. Headquartered in Israel, the company has a staff of 1600, and offices in Argentina, Australia, Belarus, Canada, Japan, Romania, Ukraine, and the USA.

The company’s branding will appear on the players’ pitch entrance, the football club’s buses, and around its home ground, the Ramón Sánchez Pizjuán Stadium for the rest of La Liga’s 2017/18 season. The Sevilla shirts, however, will feature the logos of Playtika’s most popular games; the first of which will be PlayWSOP, a free online Poker game.

The deal will also see the company produce a series of short videos featuring the club’s players. The videos will be used for advertising the company’s social games on the club’s online, mobile, and other channels.

Club president José Castro expressed his appreciation of the sponsorship deal, and said it was good to partner with a thriving company. He added that the deal was important; as it would help the club not only grow its brand to international prominence.

Sevilla’s success on the pitch was honoured in 2006 and in 2007, when the Federation of Football History and Statistics named it as the world’s best club for two years running.