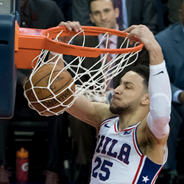 Ben Simmons is no happy camper right now – and it has way more to do with just the Philadelphia 76ers’ disappointing 104-95 loss against the Denver Nuggets.

Simmons took the brunt of the beating by losing out to the shortest player in the NBA – Argentina’s Facundo Campazzo. It had been a game of catch and release between Simmons and Campazzo all throughout the thrilling clash, but it would in the end by Campazzo that would send Simmons into an embarrassing sprawling caught on camera during the second quarter of the mash-up.

Failure To Launch For Philly

The 76ers never even moved from the starting blocks, with Simmons managing a disappointing 11 points in total as he missed quite a few simple layup attempts. And considering that the top score had been 13 points (as added to the tally by Tyrese Maxey), it had been a losing game for Philadelphia right from the start.

Simmons said post-game that the 76ers’ poor performance had been the result of a number of factors, with Philly having played their fifth game in a tiring 6-game away trip topping the list. Also contributing – at least according to the Aussie – was that there had been “a lot going on” for the 76ers, and that for him personally, it’s important to now get his business together and help the guys get back on track as a unit.

But despite the big sprawl, Philadelphia can still rest assured in the way in which they’ve managed to get by without cornerstone Joel Embiid.

Of the nine games Embiid has missed resulting from injury, the 76ers have won six. This has been a good enough performance to see Philadelphia stay on par with the Brooklyn Nets on top of the Eastern Conference, and with a 32-15 win-loss ratio to speak of.

Using the absence of Embiid as an excuse for poor performance is no good, said coach Doc Rivers of the star player’s recent absence. The focus should not be on the two games lost without Embiid, said Rivers following the loss against Denver – it should instead be on the three games won.