Why Take a Knee Campaign Is World News

The systemic prejudice that has long plagued North America and is now being highlighted by more and more people has found a voice in, among other places, the Black Lives Matter movement, a decentralised movement campaigning against violence and racism against black people. While it has found much support, there are also many loud, usually Conservative Republican, opponents to the movement.

Black Lives Matter is not the only group of people reacting to the brutalising of black people that seems almost institutionalised in some areas of the North American police force. In June 2016, Colin Kaepernick of the San Francisco 49ers knelt, or Took a Knee, during the American National Anthem before a pre-season game. He said he would not “stand to show pride in a flag for a country that oppresses black people and people of colour” and just like that, the Take a Knee campaign was born.

From the banning of Germany and Japan at the first Olympic games following World War II to the Refuge Olympic Team of 2016 that was formed to highlight the worldwide refugee crisis, there is a long history of sports stars using their celebrity and public platforms to highlight important political issues. It is not only in betting, after all, that the worlds of sports and politics intersect!

Following Kaepernick’s first actions, more and more NFL players began to kneel as the USA National Anthem was played. In September 2017, the largest-ever numbers of NFL athletes knelt before their pre-season games, and the hashtag #TakeAKnee was trending on Twitter. Many of the teams’ owners have said that they support their constitutional right to protest peacefully. Ellen DeGeneres, Bette Midler and John Legend are just some of the celebrities who have voiced their support for the movement.

Many war veterans have openly championed the movement too, posting pictures of themselves Taking a Knee online. Other athletes have also taken up the cause, including NBA stars Stephen Curry, LeBron James and MLB player Bruce Maxwell. The poignant stance has also been adopted by Black Lives Matter activists, bolstering the strength of, and support for both campaigns, and it keeps spreading wider. Recently scientists at several institutions did the same, to protest systemic prejudice of all kinds within their profession. 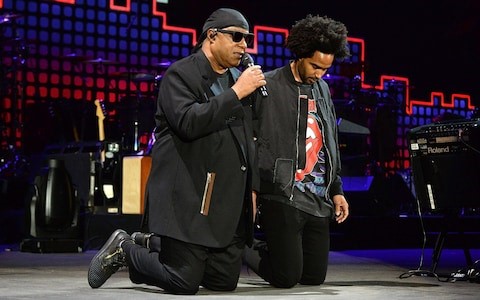 In the incredibly volatile climate of the United States, many have not received the Take a Knee campaign well. Athletes have been accused of protesting a system that they have benefitted from and that has earned them positions of privilege, and of disrespecting the American flag and all it represents, including patriotic ideals and the bedrock values of the country.

The ire has been drawn from many prominent and not-so-prominent Conservatives and Republicans, but some of the harshest words have come from the President himself. Trump has blasted the athletes at his recent appearances and on Twitter, which seems to be his preferred method of communication on most issues. Among other things, he has used slurs to refer to the players and has called for their suspension or contract termination.

The strongly held beliefs on what the Take a Knee campaign is actually about show no signs of being shaken on either side of the fence, and the way forward seems unclear. As celebrities such as Stevie Wonder, who Took a Knee while performing and offered his solidarity to the athletes but also encouraged his audience to stand up against hatred, sexism and bigotry, the message could get stronger or become diluted. Either way, things could end peacefully or in more serious violence, but for now the campaign is gathering momentum and Take a Knee is attracting attention from all sectors.