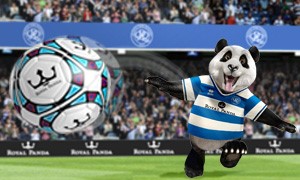 Royal Panda is determined to make this year’s football season a hot one. Punters could win a fantastic £1 million or other cash prizes as the operator celebrates the launch of its new UK sports betting online platform and main sponsorship of Queens Park Rangers!

The Malta-based operator is no stranger to the UK online casino industry, where it has already made a name for itself by offering an extensive range of games by leading software developers.

Royal Panda has applied its commitment to excellence to the new sports betting platform. The BetConstruct-powered platform provides punters with in-play live betting and excellent fixed odds on more than 140 different sports and other markets.

According to QPR commercial director Euan Inglis, the club was delighted to have Royal Panda as its new front shirt sponsor. He added that the operator had joined forces with the club at an exciting time, and that a number of innovative brand activations had been planned for match days.

Royal Panda CEO Mark Podd echoed the club’s delight at the sponsorship. For the operator CEO, sponsoring a historical club with fine traditions was a great opportunity.

Podd said he hopes the relationship between the online sports betting platform and QPR will be a lengthy, prosperous one.

To kick off its entry into the world of UK football and online sports betting, Royal Panda is giving punters the chance to win massive cash prizes in the #longshot promotion. All punters need to do to win £1 million or other great cash prizes is make a few accurate footie predictions.

Punters need to make free predictions for every QPR league match. The punter who predicts all of the club’s 2017/18 matches correctly wins £1 million.

To enter Royal Panda’s online sports betting #longshot promotion, they need to sign-up for an account for free, if they do not already have one, and then visit the promotion page.

There, punters need to predict whether QPR will win, draw, or lose each of its league matches. Punters’ predictions must be registered before the club’s 5 August 2017 first game against Reading.