The 2018 Betway World Cup of Darts 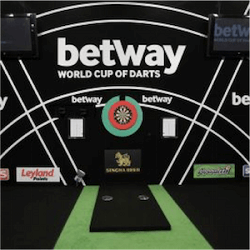 Darts may not be the most popular betting sport, but it does have plenty of dedicated fans. Played as both an individual and team sport, it requires physical skill, mental agility, concentration and the ability to implement strategy on the fly. In the world of sports betting, it is rapidly becoming a major market with both domestic and international tournaments happening throughout the year.

The largest and the most prestigious tournament in the world is the PDC World Cup. For sponsorship reasons it is also known as the Betway World Cup of Darts and consists of 32 teams from nations around the globe.

The Origins of the World Cup

The origins of the World Cup date back to the year 2009, when the Professional Darts Corporation (PDC) Chairman wanted to expand on the amateur games by buying the British Darts Organisation.

While the sale did not happen, this led to the development of 3 new tournaments, one of which was the World Cup of Darts. The first every World Cup was held in 2010 with 24 participating nations. Hosted by England, Netherlands defeated Wales in the finals to be crowned World Champs. After skipping a year in 2011, the tournament was back in 2012, with Germany hosting. This time England defeated Australia in the finals.

The 2018 Betway World Cup of Darts will run from the 31st of May through to the 3rd of June. The venue will be the same as last year at Eissporthalle in Frankfurt, Germany. 32 teams will take part in the tournament with the top-8 ranked teams being seeded while the 24 remaining teams will go in unseeded in the first round. This first round will consist of a best of 9 leg doubles.

If you are keen on wagering on the tournament you can find all you need at top-rated sites like Betway Sports, William Hill, Spin Palace Sports, Bodog and 888 Sport.

The most popular bet is the outright or tournament bet. This simply involves predicting which team will be crowned World Champs. With England and the Netherlands being the only ones with previous titles, they are the favourites. Wales is also a favourite after being runners up twice.

The World Cup of Darts also offers plenty of other betting action. During the tournament each leg and each game can be bet on individually. It is also possible to place wagers on rounds to predict which teams will make it through the first or second round. There are other online sports betting opportunities such as which team will score the first 180, which team will have the most 180’s and who will have the highest doubles percentage. If you’re looking for a new market or are a major fan, see if you can land a bulls eye when you bet online!