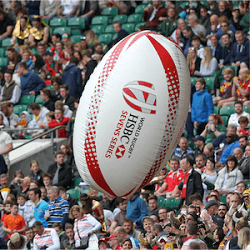 In the world of online sports betting, rugby is certainly one of the most popular markets and if you’re a fan you can put money down at Spin Palace Sports, William Hill, 888 Sport, Betway Sports, Bodog and SportsBetting.ag.

As a full-contact team sport, the game offers plenty of action, drama and exciting betting opportunities. Rugby also has many different variations including Union, League and the Sevens format. While not as established as the more traditional forms, Sevens rugby is rapidly becoming one of the more popular spectator sports, and a great one to wager on.

What is Rugby Sevens?

For those who are new to the game, it is bit like T20 cricket, in that it is a shorter, faster and more explosive game, with plenty of scoring action in a shorter timeframe. Based on the rules of Union rugby, it is played with just 7 players in each team. The time is also shortened with each half being only 7 minutes long. This result is a game that is far more active with all the action squeezed into 14 minutes. Even the smallest of mistakes has huge consequences when seconds are at stake.

The HSBC World Rugby Seven Series is the largest and most prestigious in the sport. Created from the joining of the Hong Kong, Auckland and the Melrose Sevens, the World Series currently has a set of 15 core teams, as well as one invitational team. Kicking off in December each year, the World Series consists of 10 tournaments held at different locations around the world. Starting in Dubai, the series moves to Cape Town, Sydney, Hamilton, Las Vegas, Vancouver, Hong Kong, Singapore, London and Paris.

With each tournament, points are awarded for the finishing positions with the winners taking 22 points, runners up 19 points and third place 17 points. At the end of the 10-tournament series, the team with the most points are crowded series champions. Last year, in the 2016/2017 season, South Africa were dominant throughout the series and eventually won the series with 192 points. Runners up were England on 164.

This year in the 2017/2018 seasons, 8 out of the 10 tournaments have already been played. Currently Fiji holds the lead, with 145 points, while South Africa are just 4 points adrift. Fiji have won the last 3 tournaments taking gold in Vancouver, Hong Kong and Singapore. The next Sevens Tournament will take place in London on the 2nd and 3rd of June. Realistically, Fiji and South Africa are the only ones who have a shot at the title, while New Zealand could creep into second if things go wrong for South Africa.

The London Sevens series provides plenty of wagering opportunities with different sports betting odds for online punters. Bets can be placed on the series winner, as well as on every single game in London. Within each game, there are even more opportunities with over/under bets, half time, points betting and prop bets such as the number of tries in each game, or which team will score first. This game is action packed in every way and a great opportunity for punters to enjoy intense action and big wins.