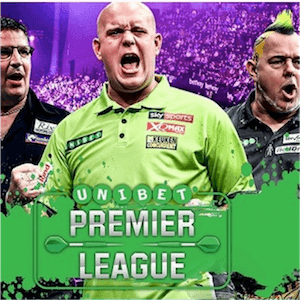 When it comes to sports, darts may not be one of the larger or the most engaging international events, but they do offer up plenty of online betting opportunities for avid punters. While there are loads of darts competitions happening all over the world, one of the most anticipated tournaments of the year is the Unibet Premier League. Kicking off on the 1st of February, the Unibet Premier League is an international darts competition that features the 10 best darts players in the world going head to head for prize money worth £200,000, as well as the ultimate bragging rights.

This year, the Premier League tournament gets under way at the 3Arena in Dublin before moving on to 15 stadiums around the UK. The action takes place over 16 successive Thursday nights, spanning from February to May. In the first 9 weeks of the competition each of the 10 players will play each other once in what is known as the league phase. After the league phase, the top 8 players go through to the next stage while the bottom 2 are eliminated.

The final 8 players face each other once more over 6 consecutive Thursday nights, after which the top 4 will emerge. The final 4 will compete in the playoffs that will be held at the O2 Arena in London on the 17th of May. For darts fans in the UK, the Premier League offers a unique opportunity to catch the world’s best players in action. The tournament sees the players moving around the UK from Cardiff to Newcastle, Exeter to Leeds, Nottingham to Belfast, Liverpool to Aberdeen and plenty of other key locations.

This year, the final 10 contenders were announced at the beginning of January. These comprised of the top 4 players from the PDC’s Order of Merit as well as 6 wild card selections. The 10 players vying for the title of premier League Champion include:

If you have a passion for darts or you simply want to get in on the betting action, you can place bets online at top-rated recommended betting sites like Betway Sports, William Hill, Paddy Power and Winner Sports.