The 2018 US PGA Championship 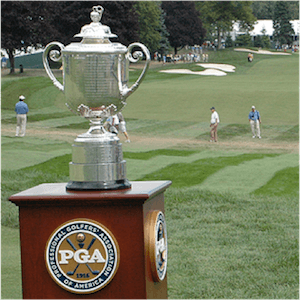 Golf is one of the most prominent sports at online betting sites around the world and if you want to get in on the action we suggest you check out Bodog, Betclic or Betfred. Played individually and in teams, it requires a high level of skill, mental agility, prediction techniques and finesse to become the best.

While there is plenty of golfing action throughout the year, the Majors hold the most prestige. These include the Masters, the U.S Open, the Open and finally the PGA Championship. The 2018 golfing season is coming to an end, and we are just weeks away from the final major of the year.

History of The Tournament

The US PGA Championship, otherwise known as the PGA or US PGA is possibly the most prestigious of the four Majors. It was initially established to provide a high-profile tournament for talented young golfers at a time when the sport was dominated by wealthy amateurs. This sentiment is carried in today and is represented in the way the entry system works.

The PGA Championship is the only Major that does not invite leading amateurs to compete. The tournament itself dates back 100 years when it was first played at the Siwanoy Country Club in Bronxville, New York. The winner was a man named Jim Barnes who received a diamond-studded gold medal and $500 in Cash.

Primarily played in the eastern half of the United States, the Championship started out as a match play event but evolved into a stroke play tournament. the winner automatically gains an invite to the other three majors for the next five years as well as a lifetime invite for the PGA Champs. The winner also receives membership on the PGA tour for five seasons and the European Tour for seven seasons.

Players qualify for the PGA Championship through a number of methods. This includes all former winners of the tournament, the last five winners of the US Open, the Masters and the Open Championships. Qualification also goes to the 70 leaders in the official money standing on the PGA tour. The total field is around 150 players with a maximum of 156.

In 2017, Keven Kisner went into the final round as the leader on 7 under par. He held a one-shot lead over Hideki Matsuyama and Chris Shroud. Failing to find his form, Kisner missed a crucial birdy and soon dropped out. It was Justin Thomas who came from two shots behind to finish off in style and win the tournament.

The 2018 US PGA Championship will get underway on the 9th of August at the Bellerive Country Club in Town and Country, Missouri. For online betting purposes, the most popular wager is the outright winner of the event. However, during the tournament bets can be placed on individual rounds as well as head to heads. Golf also offers the opportunity to place prop bets, including if there will be hole in one, players who make the cut, the winning point margin and the final point score.