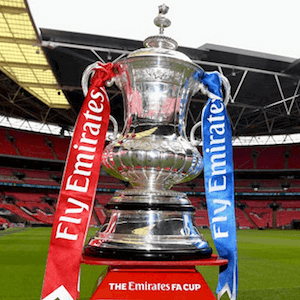 The Football Association Challenge Cup, or FA Cup, is one of the most exciting tournaments in English football. Currently, we are coming up to the end of the tournament with just the two semi-finals to play before the big final at Wembley stadium. This season has been a rollercoaster ride for the big teams as they all fell to the less experienced minnows of the competition. Manchester City is the only top-level team left in the running, giving them a clear shot at the title.

About the FA Cup

The FA Cup consists of 12 randomly drawn rounds and is open to all eligible English football clubs down to level 10. As a result, it has one of the largest numbers of team entries of any competition. In 2012, a record 763 clubs competed in the season. While the teams are not seeded, the higher-level league teams get byes to ensure that they join in the later rounds. After six initial rounds, 32 teams then progress to the competition proper.

After five rounds, the remaining teams then progress to the quarterfinals, the semi-final and the Cup Final. So far, Arsenal is the most successful team, having won 13 titles. Chelsea are the current holders of the cup but failed to reach the 2019 quarterfinals.

The FA Cup quarterfinals were played on the 16th and 17th of March. There was a fair amount of “giant killing” action taking place as Manchester United fell to Wolverhampton and Crystal Palace fell to Watford. The semi-final draw has taken place and we will see Manchester City take on Brighton on the 6th of April while Watford takes on Wolverhampton. The Cup Final will be played on the 18th of May at Wembley Stadium. Man City is picked to win with current odds of 1.40. The odds and predictions for the remaining teams look as such:

If you want to find out more about the available markets and updated odds, Sports Betting, Bodog, Spin Sports, Betway Sports, William Hill and 888 Sport are your best options.

The most popular bet is the outright winner or Cup winner. However, there are plenty of other bets to place on the match. Popular markets include first team to score, halftime betting, first player to score, first shot at goal, total number of shots at goal and if the game will go to penalties.