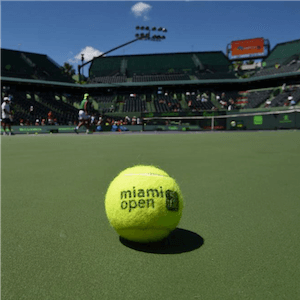 There is no doubting that tennis is one of the most popular sports for online betting. The fast pace of each game and multiple wagering opportunities makes it ideal for both spectators and punters. Now that the Australian Open is done and dusted, the tennis world is looking to the Miami Open for another display of tennis mastery by some of the best players in the World.

About the Miami Open

The Origins of the Miami Open date back to the 1980’s when former tennis pro, Butch Buchholz wanted to create an international tournament that would be the first major event of the year. At the time, the Australian Open was held in December. Affectionately known as the “winter Wimbledon” the first event was held in 1986.

Since 1986, it has been held every year, moving locations a few times before settling in its new home at the Hard Rock Stadium in Miami Gardens. The event is the only non-Grand Slam to have a draw of more than 64 players. Currently, 96 men and 96 women compete in the singles competition while 32 teams participate in the doubles.

The 2019 Miami Open will get underway on the 18th of March and run to the 31st. Since 2011, Novak Djokovic has dominated the men’s tournament winning 5 out of the last 8 tournaments. Based on his winning performance at the Australian Open, it seems as if he will be on his way to yet another win. Last year it was the American John Isner who took the honours.

In the women’s competition, Serena Williams has been the most successful, although her last win came in 2015. She will be up against the on-from Naomi Osaka who dominated at the U.S Open and Australian Open.

The Miami Open is a prime event for all online sports betting enthusiasts. Outright bets can be placed on the event where you can predict the men’s singles champions, women’s singles champion, doubles team champions and mixed double’s winners. With each match in the tournament there are also plenty of bets to place.

As well as the match winner, bets can be placed on individual sets and total number of games. If you want to know more about the betting options and the latest odds, check out Spin Sports, William Hill, Bodog or 888 Sport.