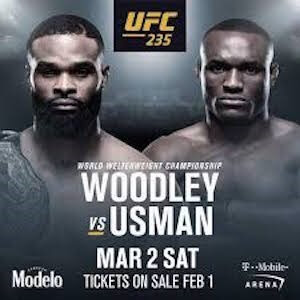 Contact sports have always been a major draw card for spectators and sports bettors alike. While boxing certainly has its place, Mixed Martial Arts (MMA) is fast becoming one of the most popular contact sports in the industry. The Ultimate Fighting Championship (UFC) is the largest organiser of MMA fights anywhere in the world.

Based in Las Vegas Nevada, the UFC brings together the best fighters from around the globe to one of the biggest gambling destinations on earth. Coming up on the 3rd of March is UFC 235 with two major title bouts on the main card and plenty more action to look forward to.

Headlining UFC 235 is the Light Heavyweight Championship bout between two-time champion Jon Jones and his eager challenger, Anthony Smith. The event will take place at the T-Mobile Arena in Los Vegas and it is all set to be one of the most exciting nights of the year. Jon Jones is man who has barely tasted defeat. In his MMA career, he has fought 25 times and only lost once. His wins are evenly split between knockouts, submission and decision.

Challenging for the light heavyweight title is Anthony Smith. While Smith is a veteran of MMA, his 44 fights have resulted in 31 wins and 13 losses. The majority of his wins have come from knockout and submission with only 2 decisions to his name.

Co-headlining UFC is the Welterweight championship bout between Current champion Tyron Woodley and The Ultimate Fighter winner Kamaru Usman. Woodley has 23 fights under his belt with 19 wins mostly by knockout and submission. Usman has just 15 fights to his name with 14 wins most of which came by decision then knockout. Filling out the main fight card for the night will be an additional welterweight bout, the women’s strawweight bout and a bantamweight bout.

UFC 235 offers up plenty of betting options for both novices and seasoned punters. For each fight, bets can be placed on the outright winner regardless of the method. It is also possible to place a bet on the method of winning which includes knockout, submission or by judge’s decision.