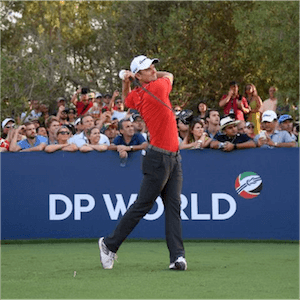 In the world of professional Golf, the PGA European Tour is one of the largest and certainly one of the most prestigious tours on the planet. The elite European Tour is also responsible for providing the most online sports betting opportunities, with punters placing thousands of wagers on each tournament. One of the highlights of the tour is the Race to Dubai which was formally known as the Order of Merit.

The Race to Dubai

The Race to Dubai is the name given to the bonus pool of $7,5 million distributed to the top 15 European Tour players at the end of the season. Previously known as the Order of Merit, the name was changed in 2009 with the addition of a new season-ending tournament called the Dubai World Championship. The winner of the Race to Dubai receives a cash prize of $1.5 Million as well as 10-year European Tour exemption.

This year, the Dubai World Championships was re-branded to the DP World Tour Championship, Dubai due to sponsorship by DP World, a major shipping company based in the UAE. The tournament has been going since 2009 and is held on the Earth Course at the e Jumeirah Golf Estates in Dubai, United Arab Emirates.

The DP World Tour Championship forms the climax of the Race to Dubai and is contested by the top 60 Golfers in the race. This year, the prize pool stands at an impressive $8 Million with the top players battling it out for the race champions and tournament champion. Last year, the winner of the Dubai Championships was Jon Rahm from Spain who carded a 19- under par to beat his nearest rivals by 1 stroke. Ireland’s Shane Lowry and Thailand’s Kiradech Aphibarnrat shared second spot with 18 under.

This year the 2018 DP World Tour Championship will kick off on the 15th of November and run to the 18th. As it stands, Italy’s Francesco Molinari leads the race with just over 4.6 million points. England’s Tommy Fleetwood is lying second while American Patrick Reed is in Third. Other big names you can expect to see at the event include Alex Noren, Thorbjorn Olesen, Tyrell Hatton and Jon Rahm. The winner of the tournament gets a 5-year European Tour Exemption.

For those who are keen on betting on the tournament, the most popular wager is the outright winner, which involves predicting the trophy winner. Bets can also be placed on the final 3, as well as each day of the competition. If you want to find out more about the markets and the latest odds, check out William Hill, Sports Betting, Bodog, Spin Palace Sports, 888 Sport and Betway Sports.