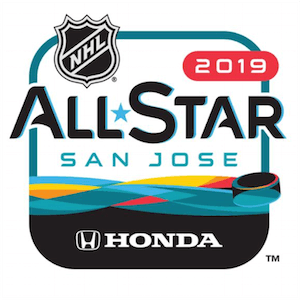 Ice hockey is a popular sport in most northern-hemisphere countries, with different leagues and tournaments happening throughout the year. The National Hockey League, or NHL, is largest and most prestigious league in the sport. The League consists of 32 teams, split into two divisions. Halfway through the season, the NHL All-Star Game is played.

First held in 1947, the aim of the All-Star game is to raise funds for the player pension funds and give fans the opportunity to see the biggest hockey stars of the league go head to head in an exhibition-style match. In the early years, the game was limited to just 2 teams playing a single match comprising of the best-of-the-best.

In 2015, the NHL changed the format of the All-Star game to include 4 teams who would compete in 3 games with a three-on-three format. Adopted in 2016, this is the current format and one that will take place in 2019. In this format, the four teams are made up of all-star players with 3 in a team. The four teams each play a semi-final with 10-minute halves and no overtime. If there is a tie, a penalty shootout occurs. The winners of the 2 semi-final games compete in the All-Star finals.

The 2019 NHL All-Star Game will take place on the 26th of January at the SAP Centre in San Jose. This will be one of the few times the match is held on a Saturday while the skills competition will be held the day before on Friday the 25th. As per previous years, the winners of the skills competition will be able to choose which opponents they want to face in the semi-finals.

Not only is the All-Star Game fun to watch, but it also offers plenty of exciting betting opportunities. On the day of the skills competition, bets can be placed on the team or player to win the fastest skater, the Puck Control Relay, the Hardest Shot, the Passing Challenge, Shooting Accuracy and the Save Streak.

For the main playoff event, bets can be placed on which team will win their semi-final match and make it through to the finals.

The most popular bet is the All-star Game winner. Within in match, bookmakers also offer a host of prop bets, such as first team to score, half time score, last team to score, if the game will go to penalties etc.