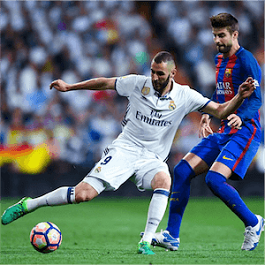 In the world of football, there are only a handful of rivalries that can stir up such passionate displays of team support. One matchup that constantly creates a worldwide frenzy is when Spanish giants Real Madrid take on their Catalan neighbours, Barcelona. Despite the fact that the two rival teams have met over 236 times, every game produces a fresh round of fanatical boasting and shirt waving. It also offers some unique online betting opportunities with top-rated betting sites offering straight bets, as well as a host of prop markets.

The last time these two teams met was in December 2017 when Barcelona humiliated Real Madrid on home ground with a 3-0 drumming. Goals by Luis Suarez, Lionel Messi and Alex Vidal gave the visitors an unassailable lead and bragging rights for the next few months. On the 6th of May, Real Madrid will have a chance to exact revenge on their rivals when they travel to Camp Nao to for their upcoming La Liga match.

As it stands, the bookmakers all have Barcelona pipped to win since they had huge success in their previous meeting and will be playing at home. But how do the teams stack up in other areas and over a longer period of time?

While Real Madrid are looking for their record 13th UEFA Championships title, Barca are on their way to the Primera division title, which may be all wrapped up by the time the two clash in May. If we take a look at the head to head stats, the two have locked horns in La Liga a total of 175 times. Of those, Madrid has won 72 matches while Barcelona have won 70. The remaining 33 games have all been daws.

In the Copa del Rey, the two have met just 33 times. This time, Barcelona have the edge with 14 wins to Madrid’s 12. In the Champion’s League, there have been 8 meetings between the two sides. Madrid have won 3 of the clashes to Barcelona’s 2. In total, the teams have met 263 times in all the different competitions. Madrid has won 95 matches while Barcelona have won 92.

If we take a look at individual achievements, both teams have racked up serious honours, however Madrid has won more trophies. To date, Madrid has won La Liga 33 times to Barca’s 24. With the Copa del Ray, Barcelona hold the lead with 29 titles to Madrid’s 19. In the Champions League, Madrid reign supreme, with 12 titles to Barcelona’s 5. Both teams have won the Club World Cup a total of 3 times, so there is not much separating them.

With their upcoming match on the 6th of May, punters have the chance to put their money on the line. In addition to placing outright bets on the winner, there will be plenty of prop markets to wager on, including the first team to score, first player to score, total number of goals, half time score, head to head bets and more. To get in on the action, check out Titan Bet, William Hill, Betway Sports, or Winner Sports.