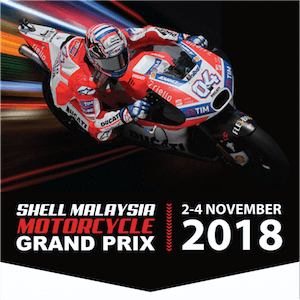 For motorcycle and sports enthusiasts, there is nothing more satisfying than watching a MotoGP Grand Prix race. As the highest class of Motorcycle racing in the world, Grand Prix racing or MotoGP attracts thousands of visitors to the track, and millions of viewer’s eager to catch the action live. MotoGP also happens to be one of the largest sports betting markets, with plenty of punters placing bets on the outcome of each race.

We are coming up to the end of the 2018 MotoGP season, with just a handful of races left. As it stands, Spaniard Mark Marquez leads the rider’s standings with 271 points, a full 77 points ahead of his nearest rival Andrea Dovizioso at 194 points. The Italian is closely followed by his countrymate Valentino Rossi who sits 22 points behind him on 172. These are the top 3 riders to watch in the final few races of the season.

Once race which certainly could shake up the points log is the Malaysia Motorcycle Grand Prix. First held in 1991, the Grand Prix is raced on the famous Sepang International Circuit in Selangor, Malaysia. Designed by Hermann Tilke, Sepang was used for the Malaysian Formula One Grand Prix between 1999 and 2017. It is famously known for its long back straight and sweeping corners.

The most successful rider at Sepang is Valentino Rossi who won the MotoGP Grand Prix in 2003, 2004, 2006, 2008 and 2010. Interestingly, it has been his countrymate Andrea Dovizioso who has dominated the race for the past 2 years. Dovizioso won back to back titles in 2016 and 2017 and will be looking to make it a hat-trick. His points rival, Mark Marquez only won the Malaysian Grand Prix once, back in 2014.

This year the 2018 Malaysian Motorcycle Grand Prix will get underway on the 2nd of November with the main race on the 4th of November. If Dovizioso is able to claim yet another win, he might just be able to get himself in the running for the title. for anyone interested in betting on the race, the most popular wager is the outright winner. This simply involves predicting which rider will win the race. Other betting options include predicting the winner manufacturer and winning team. Prop bets can also be placed on fastest lap time, number of stops and if any riders will crash out.

If you want to know more about the betting markets and available odds, you can find everything you need at Bodog, William Hill, Sports Betting, Spin Palace Sports, Betway Sports and 888 Sport.