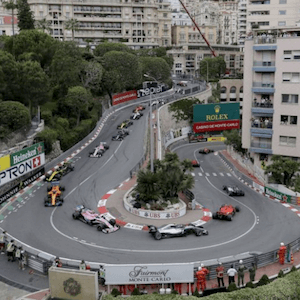 The 2019 FIA Formula One Championships is in full swing, with Mercedes already showing their dominance by picking up wins in Australia and Bahrain. While there are a few exciting races coming up in the next few months, the Monaco Grand Prix is where the things really heat up. This is one of the most technically challenging races on the calendar, with sharp turns, narrow tracks and no margin for error.

The Iconic Track in a Beautiful City

The Monaco track was included in the World Championships back in 1955. From that first year, it was clear that it would be one of the most demanding races in Formula 1 and one that every driver wants to win. In Monaco, drivers must have the right combination of bravery and technical precision with some of the tightest corners in the sport and some of the fastest straights. Due to its slim design, there are very few areas where overtaking is possible so setting the fastest time in qualifying is key.

The 2019 Monaco Grand Prix main race will take place on the 26th of May with qualifying on the 25th. The venue will of course be the famous Circuit de Monaco in Monaco. Last year, Daniel Riccardo set the fastest lap in qualifying and subsequently went on to win the race. He was chased most of the way by Vettel and Hamilton who finished up in second and third respectively. As it stands, Valtteri Bottas and Lewis Hamilton top the driver’s standings with one win each, with plenty of racing action to go.

The Monaco Grand Prix is one of most popular motor races in the world. During race week, thousands of tourists descend on the city, hoping to catch some of the action. On the day of the races, millions of viewers tune in to watch the action live.

The race also offers plenty of betting opportunities for online punters. Betting on the winning driver and winning constructor is where you can start but there are also plenty of prop bets like who will take pole position, who will set the fastest lap in the race, will anyone crash out and how many pit stops will be made. If you want to find out more about putting money on this race, check out Spin Sports, Betway Sports, Bodog, or William Hill, where you’ll find the best odds online.