The 2017 Davis Cup Final- Facts and Stats, Past and Present 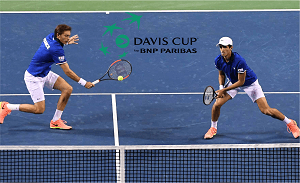 The 2017 edition of the Davis Cup started in February and is set to culminate in a match that starts on Friday the 24th of November and runs to Sunday the 26th of November. The Cup is significant for a few reasons; it is a team tournament in a sport that is dominated by individual contests, and on top of that is the world’s only team-based tournament to have lasted a full century.

Watching and betting on all 3 events is exciting, and fans are looking forward to the showdown between France and Belgium. The nonplaying captains are Yannick Noah and Johan Van Herck, respectively and odds are at around 2/9 for France and 100/30 for Belgium to win outright. Both performed well in their semi-final games, though the matches were quite different.

France is the Favourite

France has lifted the Davis Cup a total of 9 times, and the country’s most recent final was against Switzerland in 2014. The last time the French won the Davis Cup was, in fact, against Australia in 2001. Belgium has never been victorious, and is in the final for the second time in 3 years. Both teams are hungry for the win, but France is the favourite to actually get it.

The final is taking place in France, so they have the home team advantage, and French star Jo Wilfred Tsonga is considered by most insiders to be the best player in the tournament. The French also beat the Serbians to win their semi-final match with far greater ease than the Belgians beat the Australians in theirs.

Tsonga won the match against Serbia for France, beating Dusan Lajovic 3-1 in the first of the reverse singles and sealing his team’s place in the final. Things were tighter for Belgians, who were at 2-2 the end of first 4 rubbers. Steve Darcis saw Jordan Thomson off in straight sets over the fifth rubber, securing a 3-2 win and a shot at the cup for his team.

The final will be played at the Stade Pierre Mauroy, Lille, which is where France just crushed Serbia. The French Rugby team was to go against Japan in the venue on 25 November, but Rugby Union organisers have ceded to the Tennis tournament and are looking for another venue. While the semi-final was played on clay, a hard court is to be laid for the November showdown.

The Davis Cup is named after Dwight F. Davis, who was among the first team of 4 Harvard players that decided to challenge the British to a lawn tennis competition and who designed the tournament format and commissioned the trophy. Over its long history the Davis Cup format has changed a few times, but has been in its current state since 1981.

The team with the most Davis Cup wins of all is the United States, at 32, followed by Australia with 28 wins and then Great Britain with just 10 victories. France was the only other country to have won before 1974, so there is even more pride and historical significance driving the team to a win this year.

Many legends have vacillated between pro- and anti-Davis Cup sentiments; overall it is considered great exposure for young players, but it can be difficult for a player who is trying to make the leap from Challengers to Grand Tours. David Goffin is the Belgian stand-out player, and it will be interesting to see what he and Tsonga, in addition to all the other players, do in this match and in whatever comes next.