Get to Grips with the 2017 Giro d’Italia 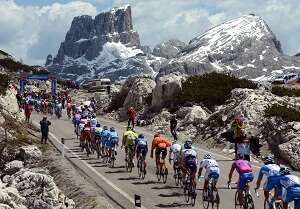 The Giro d’Italia is set to take place from the 5th till the 28th of May 2017, and all of the 21 phases to be cycled over the race’s 3 weeks have now been announced. It’s the first major cycle tour of the year, and marks the race’s 100th run, so it is more promising than ever.

Cycling betting can be very tricky, and it’s important, as always, to do as much research into the contestants and the conditions as you possibly can. As the race draws closer, you will need to stay on top of injury reports, expert opinions, different odds and other relevant factors. For bettors who want to start thinking about wagers, we’ve put together what we know now so that you can get a head start.

The Trophy and Jersey

Being the centenary of the Giro d’Italia, the course has been designed to include sites of important historical and cultural significance in Italy, as well as some of the most scenic and challenging cycling spots in the country’s landscape.

The race will begin in the south, as tradition dictates, and then after several stages for the sprinters it will progress to the Alps in the north, and the Dolomites in the east. It will finish in Milan, with about 6 stages for sprinters and several for climbers. 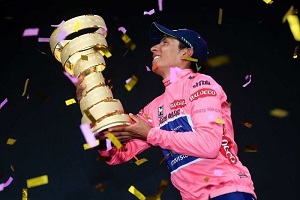 The line-up of cyclists for this year’s race reflects the fact that it is very geared towards climbers. Defending champion Vincenzo Nibali, 2014 winner Nairo Quintana and Fabio Aru are all riding, for Bahrain-Merida, Team Moviestar, and Astana respectively.

Quintana is the current favourite, with odds between 2.10 and 2.00, and Nibali is just behind him with odds from 6.50 to 6.00. Aru had something of a disappointing Tour de France last year and some thought he wouldn’t participate in the Italian race, but the chance to return to his home region has proven too tempting to resist.

Everyone will be watching Aru and Nibali go up against each other, having last ridden in the same major race as teammates in the 2013 Giro, when Nibali went on to win his first Pink Jersey. Mikel Landa of Team Sky will also be riding, and will be feeling the pressure – he has performed well in the past and then gone on to deliver disappointing results, so this year’s Giro d’Italia is a chance to redeem himself to an extent.

Within Team Sky, however, Landa is not the only cyclist interested in leading the group – both Wout Poels and Geraint Thomas have said they’d like to do so. However, they are key to Chris Froome’s Tour de France effort and may not be put into such a position now in order to preserve their energy for the July tour.

Tejay van Garderen and Thibaut Pinot are just 2 of the first-timers to watch in this year’s Giro d’Italia. They too have had some disappointing results in previous races, including the Tour de France, and are looking to make a comeback in the Italian race. Pierre Rolland has only been seen in 1 Giro before, in 2014, but it came with some truly impressive action and it will be interesting to see if he can repeat that. His goal this year is said to be taking out a stage rather than going for the GC.

There are many more high-profile cyclists participating, and with the addition of the interesting course, this centenary edition of the Giro d’Italia is sure to be full of thrills and spills.