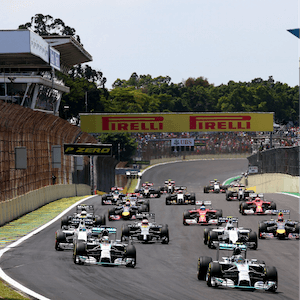 Formula One is the pinnacle of motor racing, attracting thousands of visitors from around the globe and millions of viewers for each Grand Prix race. Formula One is also one of the largest betting sports, with outright and prop bets offered on every event. One of the most exciting races of the year is the Brazilian Grand Prix.

Held at the Autodromo Jose Carlos Pace (Interlagos) in Sao Paulo, this pre-WW2 track was built in the late 1930’s and is both technically challenging and a favourite of many drivers. The first Brazilian F1 Grand Prix was held in 1973, with local fans treated to a home win when Fittipaldi took the chequered flag in front of thousands of screaming fans. Brazilian drivers also went on to win the event in 1974 and 1975, much to the delight of the locals.

The Interlagos track starts with drivers completing a type of half oval before making their way through the Senna S down to turn 4. The snaking section features a series of difficult camber changes before heading up the hill to the final banked turn. Last year, Sebastian Vettel achieved the fastest time in qualifying with Lewis Hamilton two behind. Despite setting the fastest lap during the main race, Vettel only managed a fourth-place finish with Hamilton in ninth.

The 2017 race winner was Max Verstappen with Red Bull Racing Tag Heuer. The current driver’s standings has Lewis Hamilton in the lead with 331 points while Sebastian Vettel is a full 67 points behind him on 264. With only a few races left in the season, Vettel will need to use all his speed and skill to win the upcoming Grand Prix races to ensure he has a shot at the title. Being that he set the fastest lap in Brazil last year, he has a chance to win in 2018.

The 2018 Brazilian Grand Prix will get underway on the 10th of November with qualifying while the main race takes place on the 11th of November. For anyone interested in betting on the race the most popular wager is the outright race winner. This simply involves predicting which driver will win the race. It is also possible to bet on the winning constructor, the top-3 placings, number of pitstops, safety car and drivers not completing the race.

If you want to find out more about the available market and odds, you can check out the details at these top-rated sites: Spin Palace Sports, Bodog, Sports Betting, William Hill, 888Sport and Betway Sports.