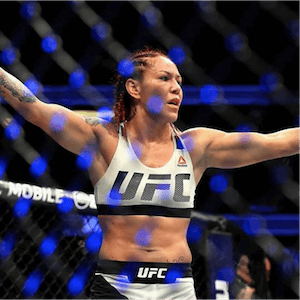 Punters and MMA fans have been looking forward to the upcoming UFC 222 event to be held at the T-Mobile Arena in Las Vegas for a few months now. Originally scheduled to headline the event was the much-anticipated fight between the UFC featherweight champion Max Holloway and former UFC Lightweight Champion Frankie Edgar. However, due to an injury suffered by Holloway, the epic matchup has been pulled from the program yet again.

The two were scheduled to meet 3 months ago, but at the time, it was Edgar who pulled out, citing an eye injury. The good news is that we now have an even more exciting matchup headlining UFC 222. Headlining the event on the 3rd of March will be Brazilian MMA superstar Cris Cyborg. The current reigning UFC women’s featherweight champion will be back to defend her title for the second time. She will be going up against former Invicta FC champion Yana Kunitskaya.

Weighing in at 145 pounds, Cris Cyborg has been dubbed one of the greatest female fighters of all time. In December last year, she recorded an impressive 5-round win over former world titleholder Holly Holm. Hailing for Curitba, 32-year old Cyborg plans to extend her record of 21 unbeaten fights when she goes up against the Russian might of Yana Kunitskaya. Originally, Kunitskaya was scheduled to make her UFC debut against Leah Letson but now she has the opportunity to add some impressive silverware to her collection, should she win.

For anyone who wanted to see the great Frankie Edgar in action, the good news is he will be fighting in the co-main event. The former featherweight champ held the crown from 2010 through to 2012 and has been in great shape for the past few years. In his new division, Edgar has won 7 out of 9 bouts including some big names like Cub Swanson, BJ Penn, Urijah Faber, Jeremey Stephens, Yair Rodreguez and Chad Mendez.

UFC 222 will not be a walk in the park for Edgar. He will be stepping into the ring with California’s Brian Ortega. The up and coming UFC star has won all 5 of his UFC victories either by knockout or submission. In his most recent fight, he took down Swanson in just 2 rounds. Also included into the UFC 222 bill is the featherweight matchup between Sean O’Mally and UFC veteran Andre Soukhamthath. If you want to get in on the betting action, you can find everything you need at these fine online bookmakers: Betway Sports, Titanbet, Paddy Power, Winner Sports, 888 Sports and William Hill.